We already explored PowerPoint’s embedded animations in 3D objects. Yes, these embedded animations are only available in 3D objects within the Online 3D Models dialog box, but there is so much more you can do with these animations. Did you know that you can turn off the 3D animations? Or limit the number of times that the objects animate? Or did you know that some objects have more than one embedded 3D animated Scene, so that you can choose the Scene you want? We will explore all these options within this post.

Some 3D models have multiple embedded animations, known within PowerPoint as Scenes. In the last tutorial, we looked at the Toaster 3D model that had just one Scene. However, the 3D model for Saturn, shown in Figure 1, below has three Scenes!

So how do you know where you can discover these extra Scenes? You can find them in both the 3D Model Tools Format and the Animations tabs of the Ribbon. Make sure your 3D model is selected on the slide before you start looking for the extra Scenes!

Within the contextual 3D Model Tools Format tab of the Ribbon, you will find the Scenes button. Click this button to bring up a gallery with all embedded animations, as shown in Figure 2, below. 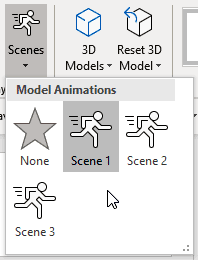 You will notice that there are 3 Scenes available for the Saturn 3D model. The default Scene that PowerPoint applies is typically Scene 1. Also, do notice that there is a None option, which when clicked, will turn off all Scenes, and will make your 3D model, behave like any other 3D model, without any embedded animations.

As mentioned earlier, these extra Scenes can also be found within the Animations tab of the Ribbon, as can be seen in Figure 3, below.

Figure 3: Scenes within the Animations tab

You can turn off Scenes by simply clicking the None option, shown in both Figures 2 and 3, previously on this page.

Most users like these Scenes, but let’s face it: if you have an animated 3D object on a slide that keeps animating itself all the time, you might as well have no hopes left from gaining any attention from your audience!

The first time your audience sees the bread slide pop out of the toaster, they might find that act cute, but you cannot expect them to see that same scene a hundred times. So, how do you prevent the toast from popping off, or any other animation from playing more than a few times?

In this post, we learned that embedded 3D animations in PowerPoint are easy to use, and they are also very powerful. There are options which may at first not be so obvious, but once you play with them, you will be able to make the Scenes work exactly as you need.

This site uses Akismet to reduce spam. Learn how your comment data is processed.